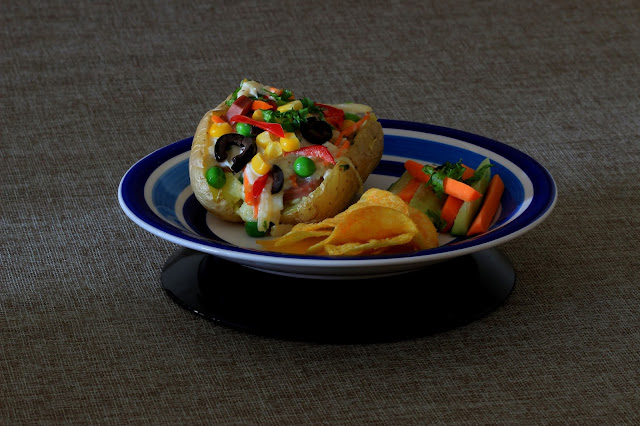 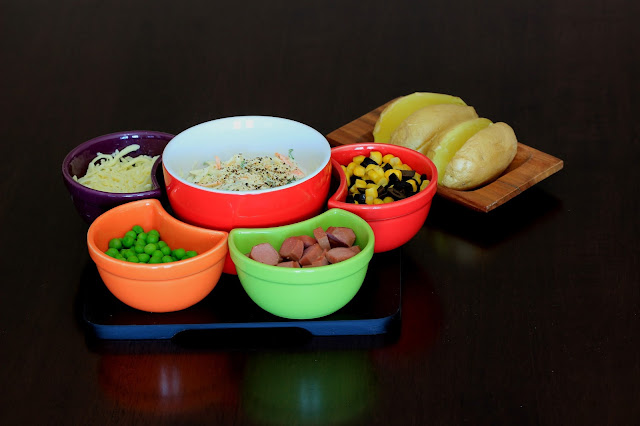 
In two bowls I added water and poured the frozen peas and corn separately and set the microwave on high for 8 mins and they were done. It could take more or less depending on the amount.


I guess everyone would bake the potatoes first but me being lazy as usual with no patience I just washed the potatoes well using a vegetable brush. Dried the potatoes with a paper towel and pierced them with the fork in a couple of places and used the microwave to boil them with their skin. I used two medium potatoes as I was preparing this for the kids. It took me about 6 mins.


While the potatoes are still hot cut them potatoes lengthwise from the middle with a knife but not separating them.


With a spoon just scoop the inside of the potato(but leaving it inside the potato) and mix 2 tsp of mozzarella cheese into the potato and mix well till you get the consistency of chewing gum.


Add the apple coleslaw, then top it up with the corn, peas, sausages, bell peppers, olives and coriander.
(The amount for the ingredients could differ as your preference like mine always does depending on my mood!!)


You can complement it with sliced cucumber, carrot and chopped coriander.


Serve it hot and since it was all healthy I though a little bit of chips could do no harm ;)

Cheers and have a great day ahead!!

View my complete profile
Born in the North East of India(Meghalaya) and now a resident of Sydney, with Arun and our two angels aged 12 and 9. I was working with an NGO in Dubai, a school for the differently abled/ special need children and loved every moment of it!!
Now I have my own little handcrafted accessories business (by the name of ARTantana Handmade)